For about 4 years, I’ve been a hypocrite. I’ve been running a company called GetMorePC in Knoxville, TN, helping small businesses get their technology up and running, quick and efficient. I work on a Dell PC at home and a built PC at work. But when I go out to meet with clients, I bring my 15″ MacBook Pro. You heard that right: GetMorePC uses a Mac mobile.

Now let me be straight with you, this isn’t my main machine. Every time I turn it on, I’m stuck in update Hell for at least 30 minutes and yes, it happens on Macs too when you don’t use them often. My most frequented PCs at home and the office are used and abused on a daily basis, but they always take a lick and keep on ticking. Being PCs, they are upgradable. So I have upgraded the video card in my home PC to an NVidia GTX 980 to run my Oculus Rift and my HTC Vive. Runs like a champ. My only complaint is that Office 365 forces me to login like 20 times per activity I’m trying to accomplish on my account with Onedrive or Sharepoint. But I digress. 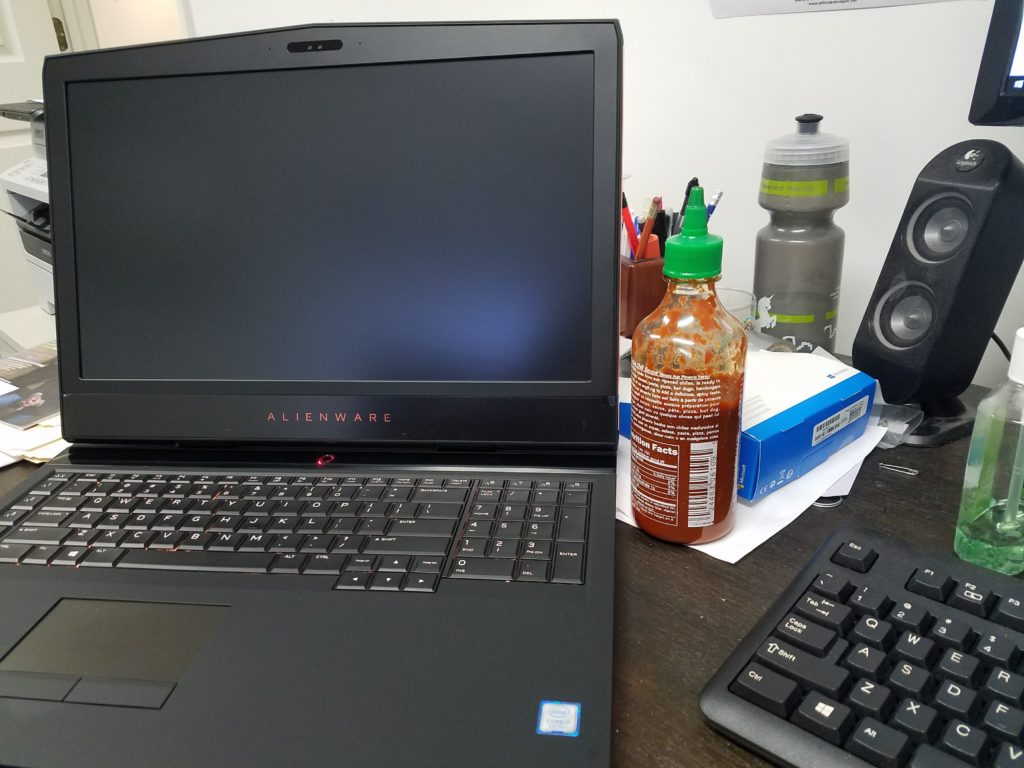 My Macbook Pro still runs great, I’ve even got a virtual PC running in VirtualBox on the Mac, for when I’ve just gotta run Visual Studios or something else not cloud-based. It will not run VR hardware, past my Oculus Rift Developers Kit 2. So I need an upgrade. I started searching for a suitable laptop that would run VR hardware and what that equates to in essence is a gaming laptop. In my mind, there is only one great brand of gaming laptops: Alienware.

Imagine to my surprise when I journeyed to Best Buy last night with the intention of only perusing their wares and I saw it: a 17″ Alienware laptop with the 7th generation Core i7 processor, 16GB memory, and a GTX 1070 graphics card. It was exactly what I’ve been looking for. I wanted to buy it locally in case I had problems that required a trip to the retail outlet. I was on the fence as to whether or not I should get it, but the sales guy told me I’d have 14 days to return it if I didn’t like it. I was sold.

I got this monster home and started setting it up, essentially plugging it in. Its very neon. The touchpad and sides of the display light up with neon colors that I can specify with their builtin app. Showy, but I liked it. One of the reasons I went with Alienware is that it didn’t look like a gaming laptop. There is no pretentious “Republic of Gaming” badge on the back or even a smirking gamer face, only a metallic low-key alien head.

It runs Windows 10, so of course I had problems setting it up out of the box. It had multiple updates for Windows and Alienware (Dell) that had to be installed before I could do anything with the laptop. Much to my surprise, the wireless was flaky from the get go. I noticed their Killer Wireless app was popping up and asking me to set a bandwidth limit. Okay, that gets turned off. I noticed it kept going offline while I was downloading updates. Off to download more drivers. All in all, I spent about 3-4 hours performing updates on the new laptop just to get it working like it should out of the box. Not what one expects with a $1800 laptop, but it is a PC.

Killer Wireless throttled my wireless out of the box and did not work. This killed me for a new laptop, so name checks out.

Now that I have it setup, I’m trying to download a few games, Assassins Creed Unity, Mass Effect Andromeda, and Grand Theft Auto V. I’m not getting dropped wireless anymore since I manually downloaded the latest Killer Wireless (because it dies often?) drive, directly from the Killer Wireless site. The official Dell drive failed to work properly and still dropped internet connection. This could be a how-to article on its own, since there is no documentation on the Dell site on how to get the wireless working out of the box.

So I bought a huge VR laptop. I haven’t tried the VR out on it yet, but the GTX 1070 should have no problems running the Oculus rift. I am short a few USB ports, but I’ll be able to use a USB hub (powered) to get the amount I need. I’ll give you a follow up in a week or so and let you know if I still own it. I want to love it, I really do, but I’ve been spoiled on this Macbook Pro.